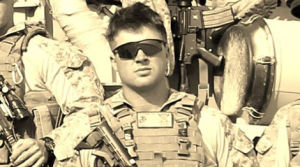 NEW BRAUNFELS -- A New Braunfels Marine Corps sergeant was killed in action Wednesday in Helmand province, Afghanistan, according to the Department of Defense.

This was Spitzer’s second deployment in support of Operation Enduring Freedom, according to the Marine Times.

“The Marines and sailors of 1st Marine Division mourn the loss of Sgt. Spitzer,” 1st Lt. Spencer R. Kenyon told the Times. “Our heartfelt condolences go out to his family.”

Spitzer’s death comes almost three years to the date – June 28, 2011 – that another New Braunfels Marine, Lance Cpl. John Farias, was killed in action in Afghanistan. Farias was deployed with the 1st Battalion, 5th Marines, Bravo Company, 3rd Platoon to Sangin, Afghanistan. He died in a firefight with Taliban forces.

Spitzer and Farias were “tight” and joined the Marines “on the buddy system,” John’s father, Felix Farias, said Thursday evening. The Canyon High school graduates both played defensive end for the Cougars, he added, and they were members of the weight-lifting team.

“Thomas was a great kid,” Felix said. “Always smiling. When we would go visit John at Camp Pendleton (Calif.) Thomas would always stay with us.”

Both Marines were serving in the same area of Afghanistan and “both were shot,” she said.

“To us, this is a double whammy,” Felix said.

Tributes to Spitzer poured in on the Herald-Zeitung’s Facebook page after the news was posted.

“Thomas was 12 years old and was on an All Star team that I was coaching,” wrote Chris Chinni. “One of the first times I spoke to him; I asked him what he wanted to be when he grew up and he said, ‘I want to be in the Armed Services, probably Marines.’ What an amazing answer from a 12-year-old.

“His answers were always ‘yes, sir’ or ‘no, sir’ and it wasn't fake, because that is who he was. He has been a hero of mine for a long time. He was always smiling.”

Teal Kathleen Albert wrote: “Witty, caring, smart, funny, strong, every word you could think of to describe a good strong man -- that was Thomas. He was always out to turn a frown upside down. He was doing what he loved ... he will be greatly missed by so many. Prayers for his family and his fiancé.”

Sami Springfield added: “He was a great guy (with) a great heart. And his smile could turn anyone's day around. Haven't talked to him since John's passing, but he most certainly will be missed by myself and countless others who were lucky to know him.”

Darlene Bell Webber posted: “Tommy and his brother, Nick, mom, Jean and dad, John, are a wonderful family and used to be our neighbors! He will always be a hero and always be remembered!”

Yvonne Farias-Short commented: “Thank you, Sgt. Spitzer, for paying the ultimate sacrifice for our country. My heart is broken and heavy hearing about another loss to our community. I'm sure my cousin, Lance Cpl. John Felix Farias, was waiting with open arms for you. May you rest in peace now guarding the gates of heaven. My condolences go out to the family. May God surround them all and give them strength at such a tough time. Semper Fi, brother.”

“It’s unbelievable,” Penny Farias said. “Joined together and end up together.”

Funeral arrangements were not known as of presstime.